Inns Near the New FLW Trail It was 150 years ago this year that Frank Lloyd Wright was born in Wisconsin. People are often surprised to know that Wisconsin has more FLW-designed buildings – 41 in all - than any other state. A new FLW Trail showcases nine buildings open for tours. Plan your motor route with stays at B&Bs along the way. [caption id="attachment_1770" align="aligncenter" width="300"] 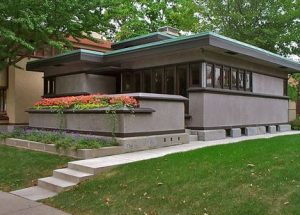 Frank Lloyd Wright was born in Richland Center, Wisconsin in 1867. To mark the occasion, the state has just christened a new Frank Lloyd Wright Trail with stops at nine buildings in the southern part of the state, all open to the public. Here are the iconic buildings on the trail, with B&Bs nearby to make this motor route an architectural adventure from start to finish. Start in Racine and tour the SC Johnson Administration Building and Research Tower as well as Wingspread in nearby Wind Point. Stay: The Christmas House B&B is on the National Register of Historic Places and within walking distance to Lake Michigan and the Racine downtown. Head to Milwaukee to see the Burnham American System Built Homes. Stay: There are three nearby B&Bs, each with their own architectural pedigree. Washington House Inn [caption id="attachment_1771" align="alignleft" width="212"] 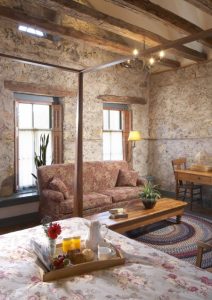 Washington House Inn Guest Room[/caption] in Cedarburg is set in a gem of an 1886 Victorian cream city brick building. Pedal’rs Inn in Wales is a grand Queen Ann Victorian with modern, luxuries amenities within. And the Westphal Mansion Inn in Hartford is an English Tudor that retains all its original architectural features. Then it’s off to Madison, for a stroll of the Monona Terrace and the First Unitarian Society Meeting House. Stay: The mix of B&Bs here is as eclectic as the city itself. The Livingston Inn features stunning architectural details inside and out, including nine fireplaces, 11-foot ceilings, and a glass atrium. Hotel Ruby Marie first received its lodging license in 1873, primarily used as a railroad hotel back then. The Buckingham Inn is a classic 1911 Prairie-style residence influenced by the designs of Frank Lloyd Wright but with a University of Wisconsin campus vibe. If you’d prefer to spend the night outside the city, then Victorian Dreams in Lodi and Altemus Corners in Stoughton are excellent choices for a relaxing night’s sleep. Next is Spring Green, home to Taliesin and the FLW Visitor Center as well as the Wyoming Valley School Cultural Arts Center. Stay: Silver Star B&B is a secluded country-style log lodge set on a bucolic 340-acre estate. [caption id="attachment_734" align="alignright" width="300"] 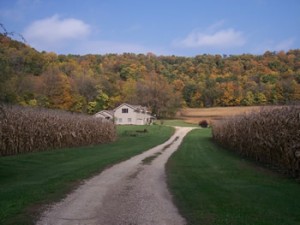 A 'long and winding road' leads you to the Cream Pitcher B&B, in Blue River.[/caption]   The route fittingly finished up in Wright’s birthplace, Richland Center, where you can tour the AD German Warehouse. Stay: There are two inns within a quick drive. Sheer Memories B&B in Muscoda overlooks the Wisconsin River Valley, while Cream Pitcher B&B in Blue River is built on a historic 1854 farm.       Frank Lloyd Wright was a visionary, a man ahead of his time, who believed in designing structures that were in harmony with humanity and its environment. All of his projects were unique. just like theB&B's in the Wisconsin Bed & Breakfast Association.

WBBA Innkeepers are passionate about creating a space that will help you reconnect with the environment around you.  Another important item to point out, WBBA members are licensed, inspected and insured.  So rest assured, you will get a good night's sleep when you stay at a WBBA B&B, feeling refreshed and rejuvenated the next morning.  Are you ready to Seek the Unique?