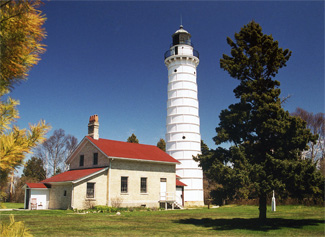 Cana Island Lighthouse[/caption] It’s a county, a peninsula, and one of the state’s most popular tourism spots. If you’ve never been to Door County, then let’s rectify that right now. Along with sand dunes, sailing, arts and culture, it’s also home to more B&Bs than any other county in Wisconsin. Think of it as the Cape Cod of the Midwest.

The Door County peninsula is a summer playground like no other in the state. It’s known for its 300 miles of shoreline along Lake Michigan and Green Bay, kayaking in the shadows of the bluffs, thousands of acres of cherry and apple orchards, wineries, a handful of state parks, art galleries, and 11 historic lighthouses. In other words, it’s magical. Adding to the magic are 10 B&Bs dotting the county. Let’s start at the county line and work our way up the peninsula. In Sturgeon Bay:

While in Door County this summer: Make a point to visit The Ridges Sanctuary in Bailey’s Harbor, celebrating 80 years of preserving some of the peninsula’s most ecologically diverse lands. Then whet your whistle at Shipwrecked Brew Pub in Egg Harbor – at 20 years, it is Door County’s oldest microbrewery.  The Door County peninsula allows you to watch a sunrise and a sunset over the water without leaving the county.  There is such a variety of things to do and see, there are thousands of acres of orchards, you can explore art galleries, pick fresh cherries, sip on local wines and brews, rent a canoe or kayak to paddle along the bluffs, hike the five state parks or tour 11 lighthouses.  No matter what you’re looking to get out of your vacation, our innkeepers will help you to seek that unique experience in Door County. As we like to remind all of our readers, all member inns of the WBBA are licensed, inspected and insured, so, rest assured, you will get a tranquil night's sleep,

Are you Ready to Seek the Unique?