Ever think of a B&B breakfast as being a buffet?  The Port Washington Inn features their Door County Cherry Bread Pudding, as favorite on their brunch buffet. The innkeepers here emphasize quality ingredients and buffet items made from scratch, no shortcuts, and that makes their full breakfasts second-helping worthy. The dish was a favorite with the Judges of our Innkeeper Cook Off contest...perhaps it will become your favorite brunch dish!

Pudding:
¼ cup butter, melted
1 loaf of bread, cut into cubes
6 large eggs
3½ cups milk (2% or any, including some half & half, if desired)
½ cup Wisconsin maple syrup
1 cup dried Door County Cherries
raw sugar Preheat oven to 450°F. Melt ¼ cup butter in a jelly roll pan. Add the cubed bread to the pan. Place in oven and toast until nicely browned (watch carefully!). While bread cubes are toasting, use a blender to blend the eggs, milk and maple syrup. Place toasted bread cubes into a large bowl and pour the liquid from the blender over them, mixing well. Add this mixture to a previously well-buttered 9x13-inch baking pan. Add more milk (or half & half ) so the level of liquid in the pan is approximately equal to the level of the bread. Sprinkle the dried cherries over the top, mixing them throughout the pan. Sprinkle lightly with raw sugar. Bake until the middle is firm and the top is nicely browned (approximately 1 hour).
Sauce:
frozen tart cherries, pitted
frozen sweet cherries, pitted
raw sugar
For the sauce: Purée equal amounts of tart and sweet cherries, sweetened to taste with raw sugar. For a thicker sauce, leave cherries whole and lightly sweetened to create a sauce as they thaw.
Innkeeper Tip: We use two of our small loaves of homemade wheat bread. Make sure you have enough toasted bread cubes to fill a 9x13-inch pan, slightly heaped, as they will be absorbing some of the liquid.
[caption id="attachment_1610" align="aligncenter" width="300"] 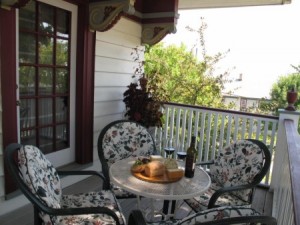 Picture yourself enjoying breakfast on the porch of Port Washington Inn.[/caption]
Receive our Newsletter for B&B travel, seasonal packages, Wisconsin fun, and tasty recipes, all delivered to you in our quarterly e-newsletter. SIGN UP!
Follow & Connect:
PH: (715) 942-8180
Like & Share: